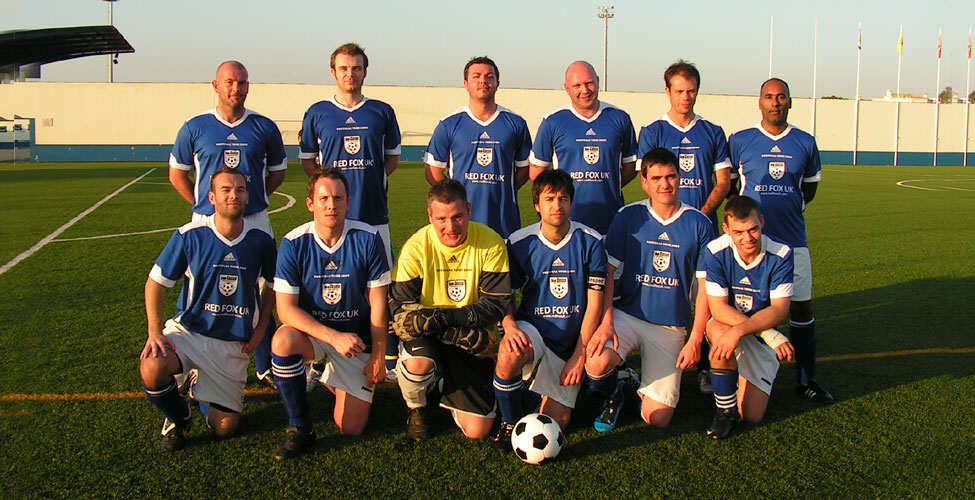 The team lined up before the controversial win over FC Ferreiras.

A more relaxed morning. The long day the night before took it out of us. Si and Hembrough were having breakfast at a place called Betty Boop, next to the pub which was due to have the SAFC game on. Me and Harper wandered along and tasted the local cuisine and culture by choosing something called “a full English.”

No sign of the others until we got back to the hotel. Cresswell claimed he’d had a blow job off someone who Muers later described as looking like Kenwyne Jones. Muers himself was nearly involved in a flare up when his bosom buddy told a big, scary looking bloke he was a cage fighter. The bout was due to take place on Saturday night. Emu also encountered a Transvestite. Think he got his or hers number. 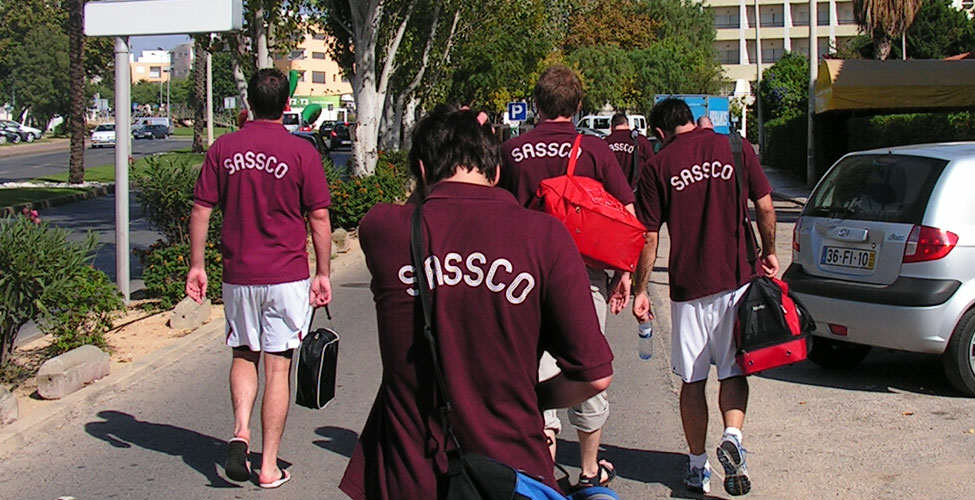 The long walk to the pick-up point. 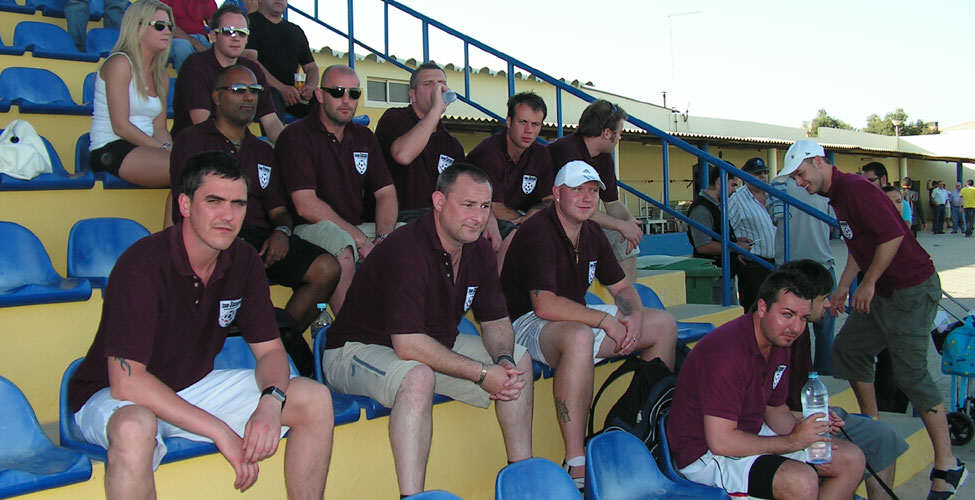 The squad relax before the game to watch Ferreiras first team in action. 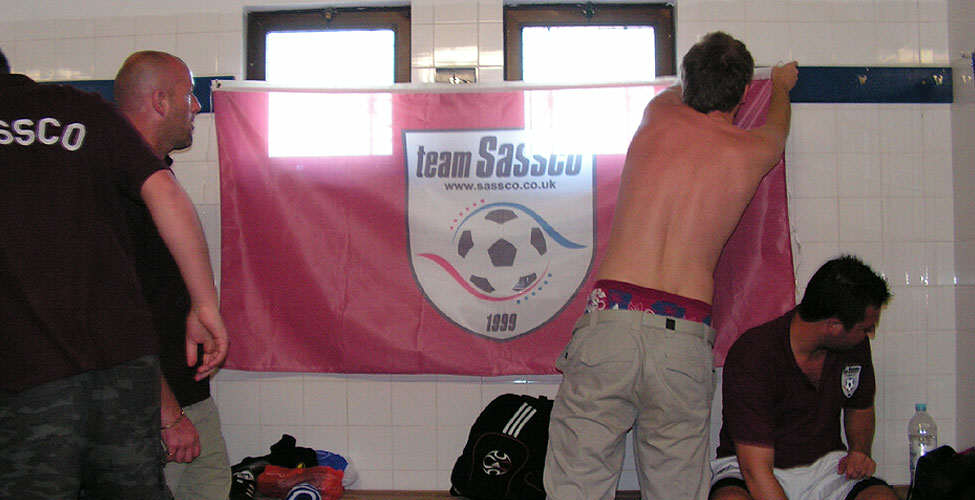 The flag goes up. Note Dixon’s duds. Apparently, he wore the same ones for all four days.

A few cliques were beginning to show within the team. Dave Smith clearly had Cressy as his “bitch.” He’s began to force Cressy to make his breakfast as well as tidying up his apartment room. Although when Cressy didn’t do a good job, Dave emptied his suitcase on the floor. We also discovered that the theory of Cressy’s gullibility is true. The theory is that if two people say the same thing, he believes it. I convinced him that we were playing the afternoon game on concrete, and by the time we’d walked a hundred metres I had told him it was indoors in a gym hall and we were going to play two games on Sunday; back-to-back. 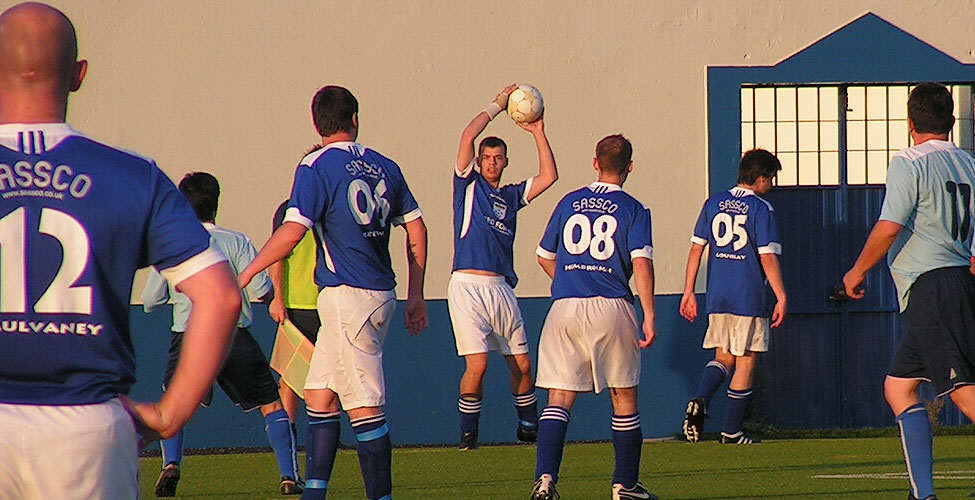 Cresswell taking a throw in.

In the Dixon, McConville, Gourlay room, Dixon had been relegated to a cold cubby hole while McConville and Gourlay were in the separate, warmer section. “Three’s a crowd” said Dave G, while the exciteable Dixon tried to snuggle amongst them. Paul is also increasingly being referred to as a “Mincer” A term coined up by Mulvaney. The whole squad is frightened to be accused of this now.

Half time team talk with Sassco firmly in command.

After breakfast, we went on a wild goose chase to find Harper some cheap sun tan lotion. An hour out, we still didn’t have any, so it was pool time. Harper then made a critical error and decided to jump into the pool. The only way I can describe it is like someone hoying a house into the pool. The error he made was that he did his calf in and spent the rest of the day walking around like a Tellitubbie. It was at this time that Emu had to bum more cash.

We caught the Sunderland game at a local bar and then trailed up to be picked up. We arrived at the FC Ferreiras stadium and had time to watch a local, lower division game containing plenty of diving and play acting and typical Latin temperament.

I was warned by Gary Thomas that our opponents today, FC Ferreiras (a representative team) would complain to the referee constantly. However, the game wasn’t too bad. Greenwell fired in a bullet free-kick to put us ahead. Ironically, we performed poorly. Passing was terrible and we never picked out the right man. Eventually, Scott Hembrough scored the second goal and we were coasting.

By the second half, Emu had to come off after an inept performance, with him suffering blisters. I came on and it kicked off (not literally, but metaphorically). We were closing in on a second goal as we now started to dominate, when Dave Gourlay had a tangle with their player. They shook hands and it was over, but then the Manager of Ferrieras (who was playing) started saying, “Any more and game abandoned.” Shockingly it occurred. Much to the bemusement of his players, he walked off and said it was abandoned. This time I steamed in calling him a “soft bastard” “Soft Shite” and probably “Mincer” somewhere in there.

I have a theory why it was called off. Back in 1961, India expelled the Portuguese from Goa using military action. The Portuguese weren’t pleased, but they could do f**k all. Once their manager saw me coming on, he though not again. There’s no way our 2-0 win over Ferreiras would be classed as the biggest thing to happen since the 1961 victory and bottled it. That’s my theory anyway. It’s probably bollocks and the Ferreiras Manager was simply an aforementioned “Mincer”.

We had a few cold drinks in the bar afterwards where I was given a Ferreiras pennant. Harper dared me to burn it infront of them.

Party night. We all went to the Old Town and had a large meal and then over to some local bars. I drunk more than I normally do and started to feel the effects. Scotty H had left straight after the meal as his guts were rumbling. Greenwell discovered some Lesbians in a bar and was compelled by them (video footage of his wide eyed reaction uploaded soon). Marky and Bianca left just after midnight so I did the same. Was fine and relaxed in bed looking forward to some sleep when I began to throw up my guts. Did me a world of good. Bit light headed, but then the wankers started to ring the door bell when they started floating in. “A farce!” mumbled the comatose Harper in his sleep.

The main points scored in the evening was Davey Smith bringing a bird back to his room. Greenwell asked for some and was told, “f**k off you little twerp!” Greenwell also made the fatal mistake of falling asleep in Cressy’s room. He was completely smothered in toothpaste, chocolate and ice. He had a Crunchie bar and Maltesers rammed up his backside and ice cubes stuck in as well. It was all caught on video and his screams were unearthly. A modified video will be posted shortly.

Also, I’ll be banging on the dick heads’ doors 9:00am in the morning. Revenge is sweet.

Hospitality in Portugal on Friday. 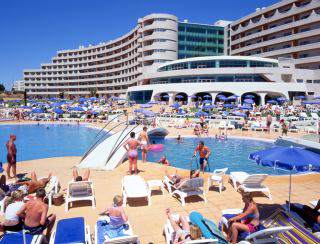 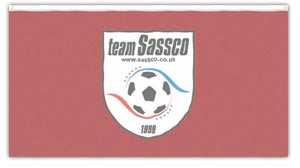