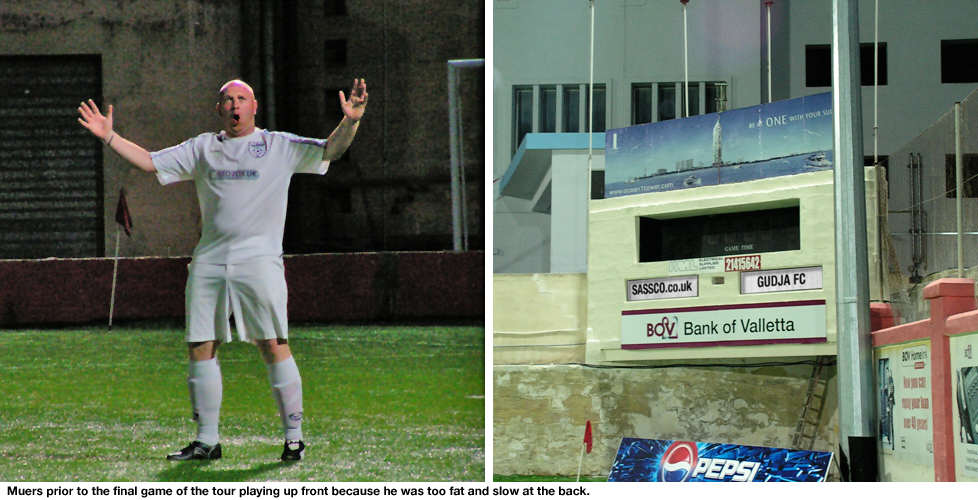 Best performance so far, but second half lack of fitness shows

The third and final game took us to the evening on Sunday. As everyone had a late, late night, we all switched alarms off for the morning. I was absolutely gutted that I got back at 3:00am, but woke up, bright as a spark at 6:30am. I wandered along the harbour for a bit and was really tempted to get fully kitted up, bang on Macca’s door and tell him the bus was waiting, before legging it back to my room, leaving him in a panic. Eventually, everyone got up around the 11:00am mark and we all had breakfast in a local bar (full English, obviously). The drinking started again there. Greenwell was still asleep and didn’t wake until the late afternoon. It sort of dawned on us that this last game needed a good performance. The extra rest helped, but the extra drink would kick in during the second half. My hangover was actually kicking in during the early afternoon. Blocked nose and a headache.

Like clockwork, we got to the stadium after 5:00pm. The opponents this time were Gudja FC, and we played the best we could. This time we were playing an experimental 5-3-2 under Dave Gourlay (who picked the formation and positions for the second game as well, due to me relinquishing managerial duties due to camera work). It was working well. Scott Hembrough as sweeper had things sewn up at the back and Cressy’s goal opened the scoring. Dave Gourlay added to it after coming close with a free kick. Paul McConville was also bundled down in the box and the overly large referee failed to award a free-kick. Criminally, Scott H’s career came to an end with an injury, which was probably a turning point. The offside trap was working well, until the referee actually overruled his linesman. It all kicked off heavily. I called the referee a “wanker” three times loudly, then we went at the linesman asking him to shove his flag up the referee’s arse. I’m convinced that inside this big referee was a little Ken Street pulling all the levers. Later on, he overruled him again and I went up to the linesman and said, “mate, may as well, get yourself up there for a pint, because that prick isn’t listening to you.” Fitness took it’s toll and eventually we succumbed to a 5-2 defeat having changed to 4-4-2 in the second half due to the wing backs struggling to get back. This concluded our marathon set of games. Lack of players, too much drink and general unfitness with two or three players, who wouldn’t have played in normal circumstances due to injury, playing.

The night saw everyone chilling out at the same restaurant we spent the opening night. Everyone was stuffed and crawled back to the hotel to sleep. Macca remembered to lock his door this time. Apparently, they were all out late again and someone saw a stray dog and made that “Here boy” clicking noise you do to any dumb animal. Macca, being of the same ilk said, “Ere, it won’t understand English.” 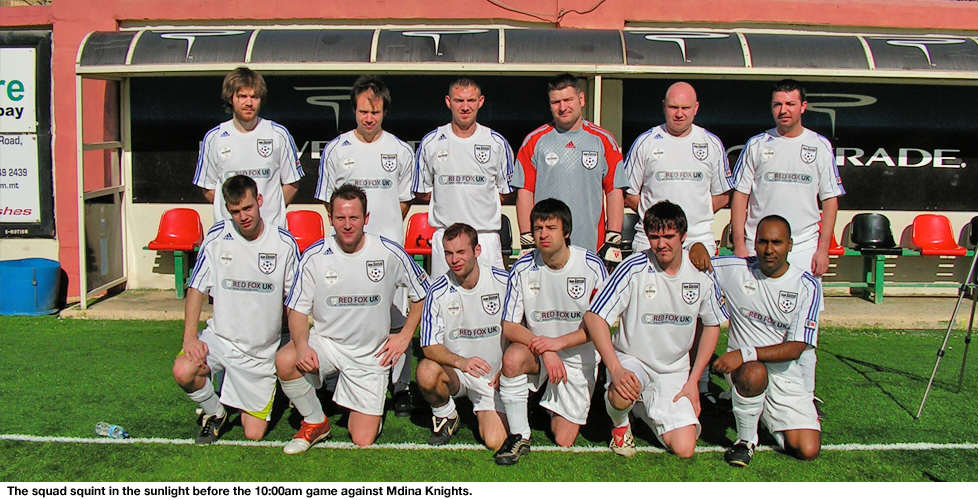