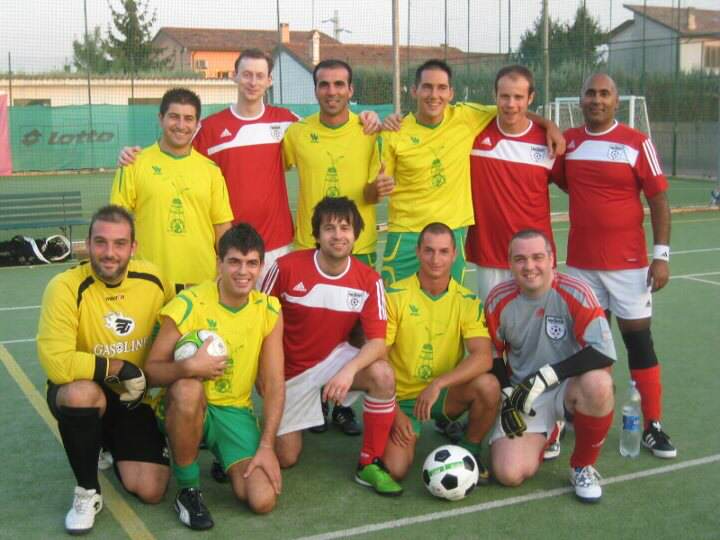 It finally happened then. After the first small sided tour in Spain, I was still getting similar questions from Tim running up to the Italian tour. However, Dave G got the brunt of the questions this time.

Me and Dave hurtled down to Leeds Bradford Airport in the dark, along Ridge Racer type roads. Dave soon got the nerves and felt like crap (as well as wanting to have one). Kev Cooper, making his debut on tour, met us outside the Airport, while Mark and Tim met us after security.

Kev Cooper managed to wedge the Sassco ball in his hand-luggage. Tim was still texting away before, during and after security. It’s a surprise that Security didn’t use him as a glove puppet.

He also let the team down by actually wearing his polo and coat, while everyone else were told not to.

Flight left on time and landed on time. Jet2 was excellent. Definitely would recommend it after our cheap efforts via EasyJet in the last two tours. On the flight itself, me and Dave were swept into a discussion comparing Adele’s vocals to Dave Smith’s for some reason.

The hotel was astonishing. It was away from the city of Venice, but it was our base for the two games (four games in total: 4 x 30 minute games versus two opponents). The facilities were excellent.

In the cool Venetian evening on the 9th September 2011, our opponents were Amici Calcetto Pellestrina, a set of lads from a team run by Gianpietro Busetto and Mauro Scarpa. Both were very similar to Sassco in it’s heyday. They ran a team which was well publicised, well organised, but above all, there to enjoy it.

We were supposed to be ready and fit for it, but had actually spent the whole day wandering around Venice, as Mark and Tim really needed to see St. Mark’s square, despite not having a clue where it was: “just round this corner” “no definitely the next one” “yep, just around a hundred metres away”

So, not the best preparation, plus the first game saw us play with the rock-solid “Futsal” ball – you don’t want one of them walloping off your skull. We struggled and were soon on the end of a walloping, despite Gourlay cancelling out Scarpa’s equaliser. Eventually we succumbed 6-1, but learned quickly once we took to the field for the second game.

This time we used our ball, but despite Busetto opening the scoring for ACP, we stormed back and took the lead with Edmondson scoring both. We were pegged back, but Edmondson secured his hat-trick, while Scarpa equalised late on.

After the event, we were taken to a nut-house of a place; literally. It was called BeFed, and essentially there were monkey nuts all over the floor and fresh nuts on the table for all two eat before we tucked in to chicken, chips and bread (with our hands).

Great welcome from ACP. They drove us there and back to our hotel afterwards, and despite only Gianpietro speaking good English (as in, our Italian was non-existent: Brit’s Abroad), we communicated well. They also helped in the recording the game as well, which will soon make it’s way to the Internet, as well as on DVD. 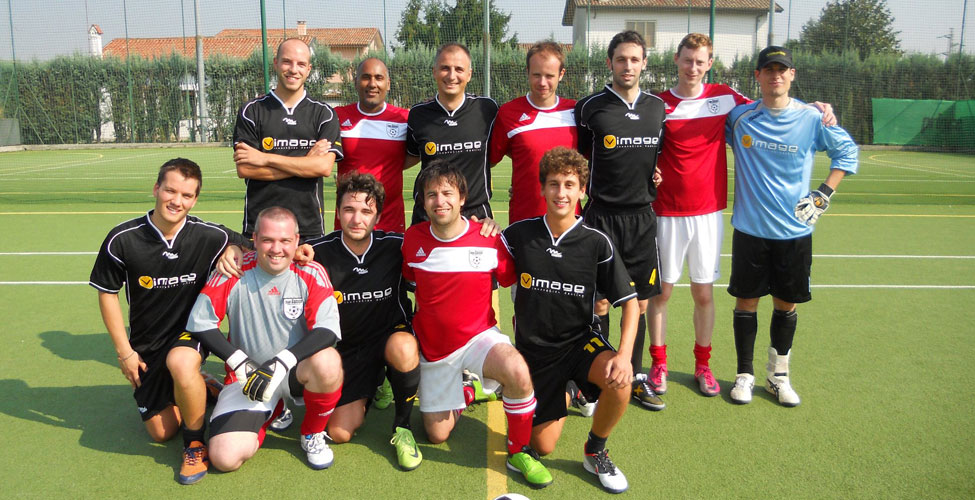