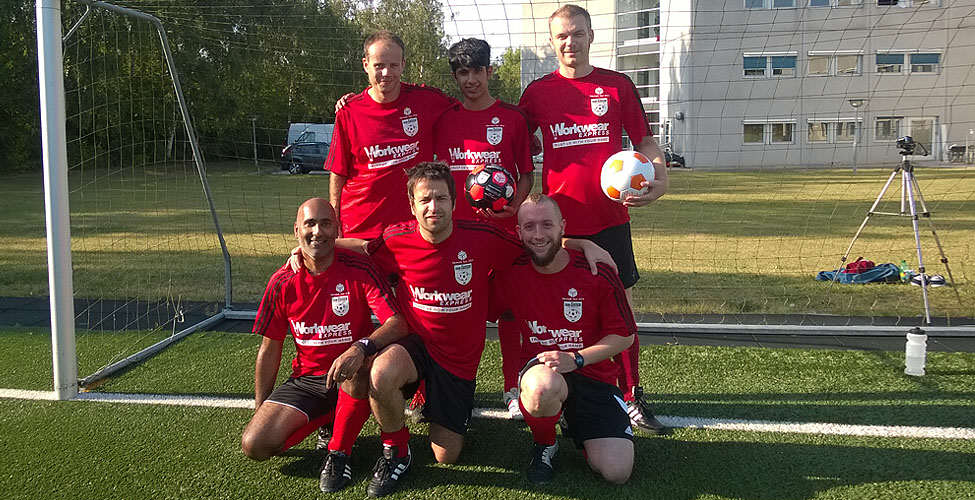 It was Sassco on Tour again. This time, six travelled down to Manchester (including the wife, Pauline), and the venue was Copenhagen. The travelling squad list included Davinder Sangha (myself), Chris Dixon, Dave Gourlay and two debutantes, Arjan Sangha and Mike Barker. Our opponents in Denmark were going to provide goalkeepers for both our football days.

The headline for the tour was that Tim Gillespie announced he was going, just like he did for the last two. However, this time he did send his hotel room deposit and soon the flurry of auto-texts were sent to me and Dave. This was just like a couple of years’ back, so the frightening reality hit that he was really going. However, he was travelling from London, so there was enough time for a catastrophe (and more for me to write about).

As always, despite the great news that Tim was probably going to be there, panic mode kicked in for me. The Vauxhall Zafira taking us down South, was a bit battered, but did manage to start up, handle all the extra soft luggage (no rigid cases please) and comfortably get us there.

I had to detour to Deliverance country to pick up Barker (from Thornley), and then head to Dixon’s country estate in School Aycliffe for him. After one piss, coffee and petrol break, we managed to get to the airport parking area, which was essentially a farm. We hurtled into Manchester airport in time to be stuck in the massive security queue where a racist security guard asked me to remove my belt, but allowed my white wife through without any problems. They’re everywhere these quasi UKIP BNP sorts. Some of them are referees as well.

The flight was actually on time and we barely had a piss break’s time to get on it. We did and we graced row 7 for the brief trip to Copenhagen. Copenhagen was more relaxed, and when we arrived, Pauline shuttled off to see her friend in Kolding, which was going to be the first venue for the tour, but lack of facilities and things to do, pushed us to Copenhagen. Tim had texted Dave to say he’d slept in. Dave texted back to confirm this was a joke, and the reply was “What do you think?” Well, Tim. Based on your past history, we really don’t know! 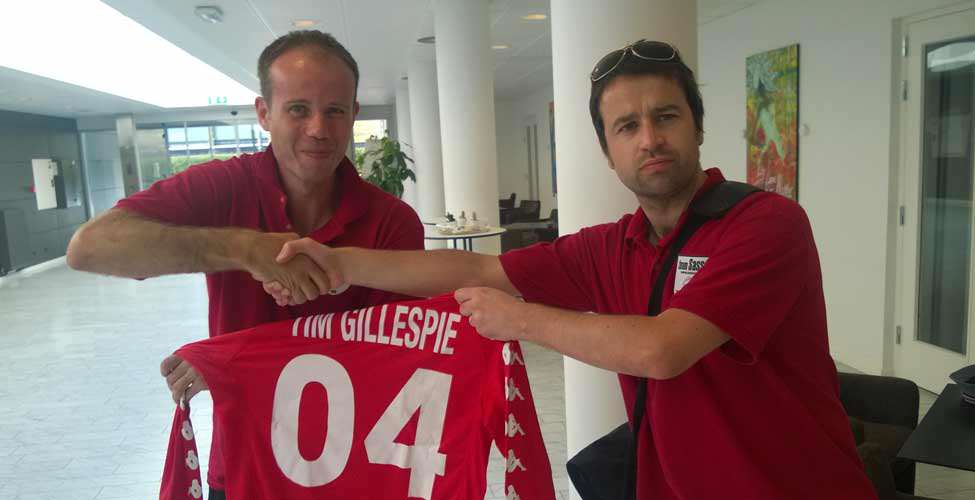 The Park Inn Radisson Hotel was a couple of stops from the Metro, and lo and behold, Tiger Tim was there and fully booked in. Little did he know, by giving his credit card details to the hotel, he actually paid for his room, despite giving me the deposit. Nice one, Tim. I also presented him his shirt from Dusseldorf (which he still hasn’t paid for).

The hotel was ideal, but steaming, due to lack of air conditioning, which meant the players were lifting even before a game. We cooled down with a drink, but eventually set off by jumping on the Metro and a couple of stops later we took the slow walk to the new venue, which was the Danish FA Headquarters in Brondby. One of their guys spotted us, namely Dixon gawping at his Google Maps to send us to the right direction. The Danes are much friendlier than the French, last year (but then the Taliban are probably a bit friendlier than the French). 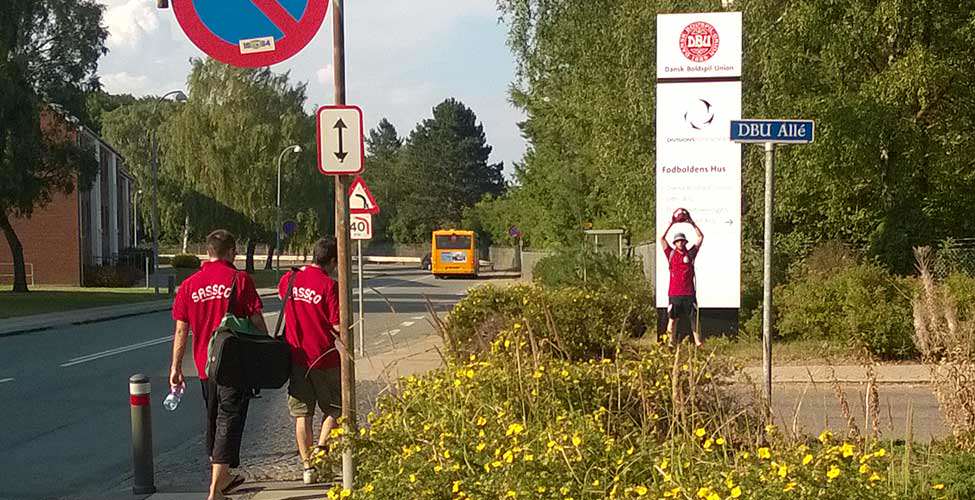 We floated into the DBU venues and finally met Kenneth Holm, the manager of IFF – Ishoj Fodbold Forening, our hosts and opponents. The venue was perfect. An excellent 3G pitch and picturesque surroundings, as well as a high fence in case Dixon’s shooting boots were off. A few photo ops later saw us fully kitted in the Workwear Express uniforms by Adidas and ready to kick off. I instructed the cameraman (can of Heineken in hand) to point and shoot and we were off. The line-up was me and Dave, the veterans of the tours, then Dixon and Tim, with newbies Arjan Sangha and Mike Barker. Our goalkeeper was Carl List, provided by our opponents. 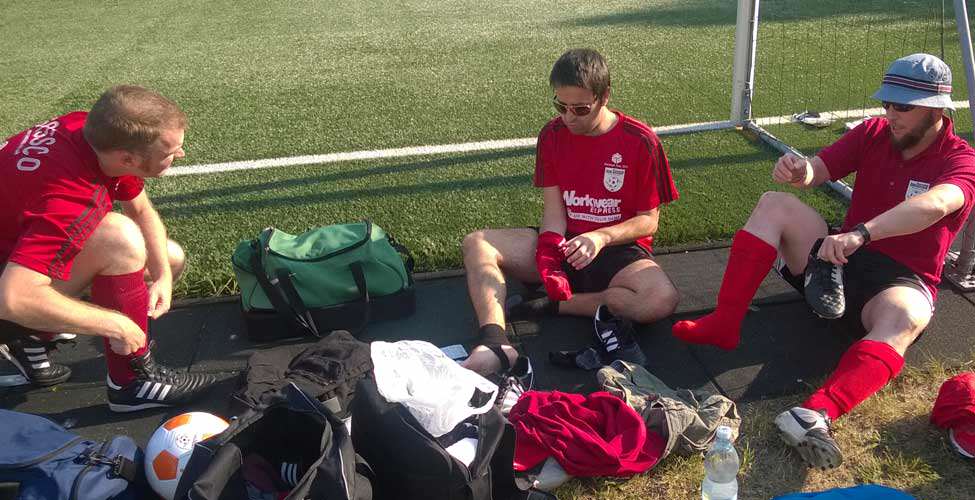 We started and raced into a comfortable 2-0 lead, with Dixon and Barker scoring, but that’s where it went tits up. The IFF team stormed back and took a 4-2 lead early in the second half. However, we did claw it back to 4-4 before collapsing to a 12-5 defeat in an hour long game. It was probably tiredness and lack of fitness. We could take a lead, but couldn’t hold it. Dave was injured prior to the tour and said he couldn’t really shoot, which is ironic, as he’s been like that for years. Tim spent the whole match yelling “Dave! Dave! Dave! Dave! Dave!” while Arjan just pointed every now and then.

Dixon and Barker performed reasonably well, with Dixon on form and looking to be recovering from his barren spell caused by stepping into some dog shit back in 2002. My usual flurry of swearwords came to the fore, as we missed countless chances and conceded easy goals. This also included the usual roar of “f*******************kkkk!” whenever we conceded. 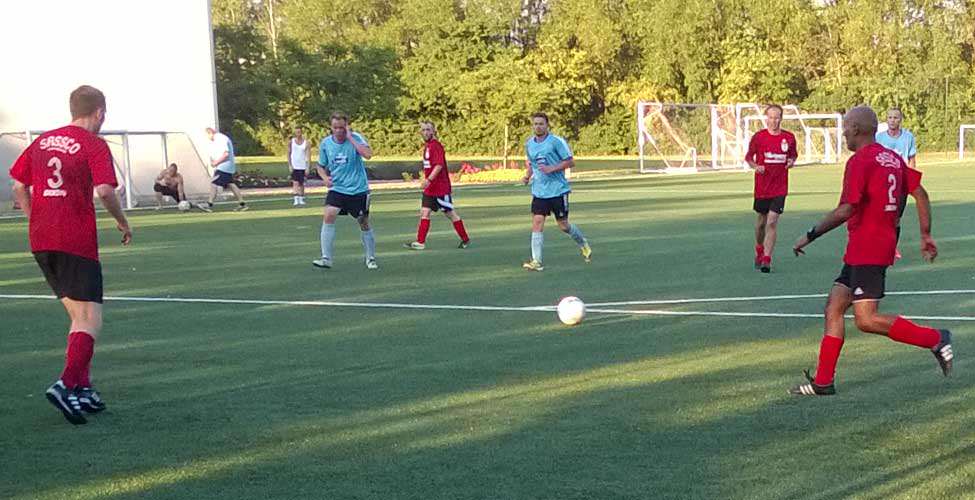 As we were trudging off, we were invited for an immediate second game, which ironically saw us performing a little better. We had one of their guys on for us, as Arjan took some blisters from my hand-me-down NASL Adidas boots. The eventual score was 5-3 and was a massive boost to the confidence of players, despite my constant abuse.

Afterwards, shit and shower then a trip to Netto (great prices!) to stock up on barbecue stuff for the beach. Our hosts were very welcoming. The barbecue consisted of hot-dogs (or sausages over there), hot-dogs and hot-dogs, plus plenty of beer. They even allowed us to take part in some drunken antics, which we normally don’t do in England. The temperature was still exceptionally high late on in the evening.

I had an early night, but spent the night listening to Barker, who arrived around 3am, spewing his ring up in the hotel room toilet and sink. Nice. 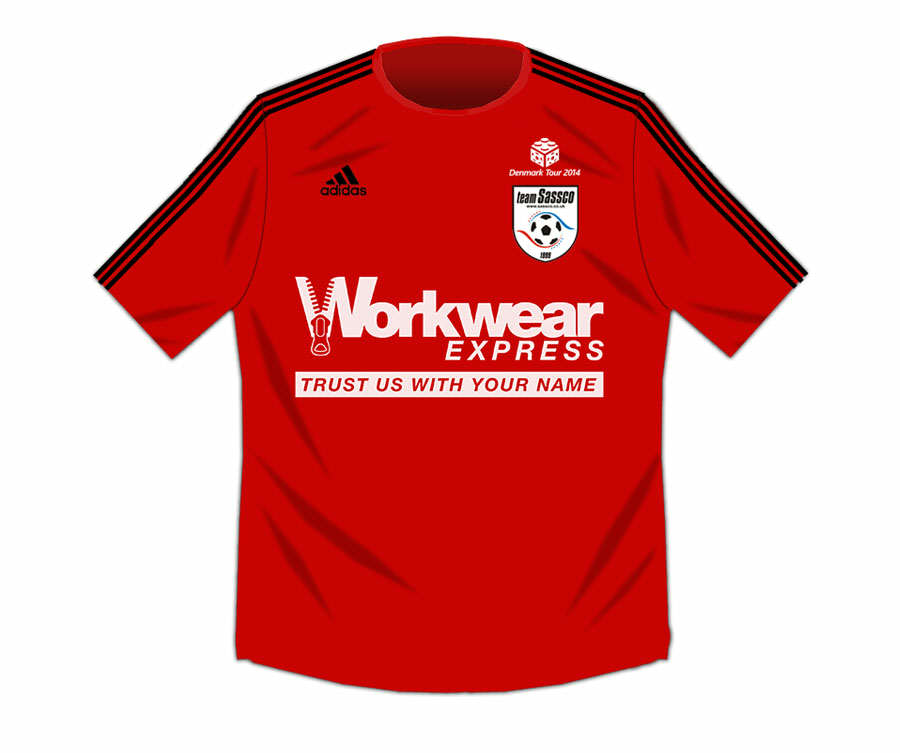 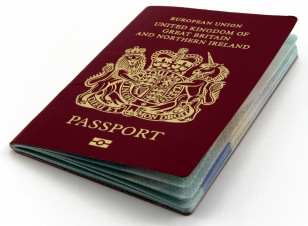