As expected, we have comprehensive records of the shirts in the team kits worn by the various teams throughout the years.

We’ve always had images and graphics of the shirts, but rarely have they been as detailed as the images updated on this page. Also, the format is the same, so the entire range of shirts is shown below. The shirts were initially used in the 6-a-side and then some crossed over to the 11-a-side based in Sunderland and the overseas tours and basketball teams.

Kappa 2019 long sleeve shirt.
Sassco 11-a-side and 6-a-side have been Adidas since 1999 to around 2008 when we decided to have a one-season dalliance with Kappa, which was abandoned mainly because most of the team struggled to fit into the Lycra inspired material. We are now back to Kappa, albeit with XL (also known as Fat Bastard) sizing. The shirt will have an embroidered badge, but no numbering on the back as of yet – this could be done at a later date. This shirt will be used in 11-a-side friendly games and also 5-a-side and 6-a-side games, as well as possibly used in the Netherlands Tour 2020. 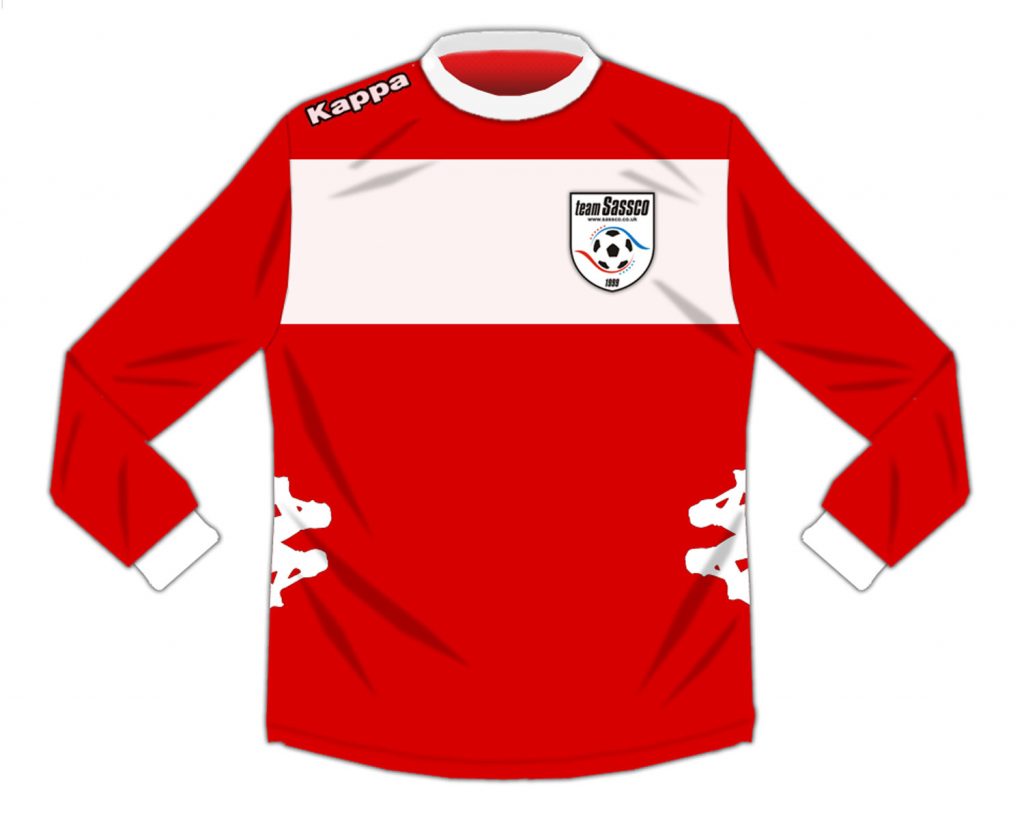 Cyprus Tour 2018 shirt.
A nod to Sunderland’s shirt in the mid 80’s for the trip to Cyprus. The same Awdis brand and style, but this time with red and white stripes, with black shorts and hooped socks. The kit was again provided by Woven Inc. 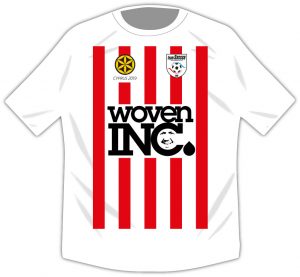 Sunderland AFC shirt 2018.
The same Awdis brand and style, but this time in white, with blue shorts and white socks. The kit was again provided by Woven Inc. The style on the front matched the popular Iceland shirt style. A single use shirt worn in the 2-2 draw against the Icelanders at The Stadium of Light. 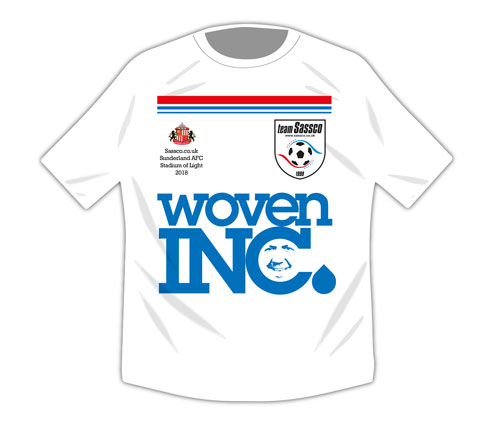 Israel Tour 2017 shirt.
With average temperatures of 25° in Tel-Aviv, in May, we went back to sleeveless like we did in the searing heat of Spain in 2010. Again, it was the Awdis brand, supplied by Woven Inc. The front pattern was unique and appropriate for our visit to the Biblical Land, and it also contained a Union Jack, so the IDF didn’t confuse us with the bad guys.

Iceland Tour 2017 shirt.
The Awdis brand was used again in the form of the JC001 shirt, in red, again, sponsored by Woven Inc. our new supplier. The shirt contained name and numbering on the back, plus the Iceland Tour logo on the sleeve and the England flag on the other sleeve.

Sunderland AFC shirt 2017.
The JC001 was in action at the Stadium of Light in 2017, supplied for the first time by Woven Inc and memorable as a single use shirt in an emphatic 7-2 win.

Sassco 11-a-side shirt 2016.
The first new shirt produced for the 11-a-side team since 2010 was due to more friendly games arranged and a revival of Sassco in general, with new 5-a-side tournaments. The brand was AWDis, who confirmed that we were the first ever team to use them as a football kit supplier. This was phased out of circulation in 2019.

Sunderland AFC shirt 2016.
The shirt is similar to the previous Charity Tournament shirt. The shirt contained a colour Sassco badge as well as printed sponsor logo and also name and numbering on the back. The right breast contains an icon of the Stadium of Light and the date to commemorate the historic event (and heavy defeat).

Switzerland Tour shirt 2016.
A superb sport Fruit of the Loom short sleeve top (provided and printed by Workwear Express). This was worn with white shorts and red socks during the tour in Geneva in 2016.

France 2009-2010, 2015- long sleeve shirt.
These were mainly purchased for the 2009-2010 season as a possible first shirt, but quickly brought into use at the start of 2009. This durable is still in used today as a 5-a-side tournament shirt and also a second 11-a-side shirt. It also contains a Charter Standard badge on the sleeve.

Sassco USA Tour shirt 2015.
The shirt was a Fruit of the Loom ringer t-shirt (provided and printed by Workwear Express) and worn with white shorts and red socks during the single tour game against Alphabet City SC, which was played in the Lower East Side in New York.

Sassco Seaham Charity Tournament shirt 2015.
The shirt was a Gildan active t-shirt (provided and printed by Workwear Express) and worn with black shorts and black socks during a charity tournament.

Sassco Denmark shirt 2014.
The shirt for Denmark wasthe Adidas AD060 t-shirt range. This is actually a general t-shirt, suitable for other activities such as golf, but is also ideal for a Summer football shirt. The sponsor logo was www.workwearexpress.com, who supplied the shirt for the tour. This was  worn with black shorts and red socks.

Sassco France shirt 2013.
Back to Adidas for France 2013 with the Autheno range. the shirt contained the embroidered Sassco badge, along with the tour logo in a central position.

Kappa Germany Tour 2012 shirt.
The Kappa shirt was Sassco’s second move away from Adidas branded shirts. The shirt contaied names and numbering on the reverse while the Sassco badge and Germany Tour 2012 emblem were on the front.

2010-2011 shirt.
The shirt was due to be used in Sassco’s ill-fated 2010-2011 season in the WCFL, which was abandoned. The shirts were retrieved and were used for Sassco’s Summer friendly games in 2011. The style is Adidas Toque and the colour is a cobalt (blue). It will have the embroidered badge, as well as the new sponsor logo of The Bunker, who are our permanent sponsors. The standard Sassco style numbering is on the reverse. This shirt is no longer in circulation.

Spain Tour 2010 shirt.
The Overseas Tour in 2010 took Sassco to Spain. The shirt was a vest instead of the previous standard football shirts, mainly due to the excessive heat which the team experienced in Malta and Portugal. Also, having to use the same shirt for three consecutive games meant that there was be less perspiration on a running/training vest. The shirt was sponsored by Red Fox.

Squadra 2008-2010 iKobo short and long sleeve shirt.
Due to the quality of the previous Adidas shirt, it was decided to focus on genuine Adidas products instead of the custom designed shirts from now on. The very popular iKobo shirt was used for the 2008-2009 season in Sunderland, Tyne & Wear, as the first shirt and carried on into the 2009-2010 season. There were a combination of short and long sleeve shirts available and these featured the iKobo sponsor markings as well as the standard Sassco style numbering on the reverse and also the embroidered badge on the front. No longer in circulation

Clone 2008-2009 Kappa red shirt.
For the first time since Sassco was founded, it was decided to purchase a non-Adidas branded shirt for the second shirt in 2008-2009 (due to excellent value). Kappa were one of the brands considered before it was decided on Adidas back in 1999. This shirt didn’t contain a sponsor logo on. It is now no longer in circulation due to unpopularity as the majority of the team gained considerable weight during the winter months. However, it was periodically used for the 6-a-side before going out of circulation.

Squadra 2007-2008 MJS short sleeve / Malta 2008 Tour shirt.
The short sleeve shirt was a very popular one. Made by Adidas, the shirt contained an embroidered Sassco badge and an FA Charter Standard badge on the sleeve (both produced and imported from China). The numbering and team name appeared on the back as they did on the previous Milltech shirt. The MJS logo appeared on the front. The numbering and logo was printed by Washington Badge & Embroidery.

This was taken out of circulaton and was re-printed and used in Sassco’s overseas tour to Malta, with the Red Fox tour sponsor logo on. This shirt is now out of circulation after November 2008 as it was given to each player who took part in the tour.

2007-2008 6-a-side long sleeve shirt.
A shirt purchased specifically for the 6-a-side Leagues. Sassco lifted a trophy wearing this Adidas branded, long sleeve shirt in 2008. The curved Sassco text appeared on the reverse and the badge was printed by Aztec Print.

2007-2008 MJS Lycra® long sleeve shirt.
The long sleeve shirt was custom produced from Sialkot, Pakistan (as were the Milltech and Manpower shirts). This was the first Sassco shirt to be made of Lycra® material. Both the Sassco and FA Charter Standard badges were embroidered, albeit not accurately, which led to separate badges being sourced from China and sewn on for any future shirts. The style was similar to the Manpower shirt, but with the addition of a collar and also a filled v-neck. The Sassco name and number appeared on the back in the style used by the previous Milltech shirt. This is no longer used by the Sassco 11-a-side adult team and had been passed on the the Under 18 Sassco Impact team for a brief time before going out of circulation.

2006-2007 Milltech shirt.
The second designed custom shirt. Made in the same high quality polyester, the shirt also contained an embroidered Team Sassco badge as well as a printed Milltech sponsor logo. This was the first shirt to show the Sassco name on the back along with numbering as 01, 02, etc. Sizing was a XL due to the sizing problems with the previous Manpower shirt. This shirt is no longer in circulation.

2005-2007 Manpower shirt.
Not hugely popular due to the size problems and poor printing of the numbers on the back. Most of the shirts were L size. But, this was the first custom designed shirt for Sassco. Made in high quality polyester, the shirt also contained an embroidered Team Sassco badge as well as the Manpower sponsor logo. Was seen from time to time in the 6-a-side, but now no longer in circulation.

A popular and much used shirt, spanning three years. Came into first use during Sassco’s 6-a-side Season 4 campaign which ended with a triumphant 4-0 win over Sporting Redhouse in the SFL Cup Competition. These had to be purchased from Germany as Adidas didn’t distribute unbranded team kits until around 2005. The blue one was a necessity as a second kit when the 11-a-side team started. These shirts were used on occasions as a spare shirt by various 6-a-side teams, but are now no longer in circulation. Made by Adidas, the shirts were 100% polyester and contained a vinyl Sassco badge with red numbering on the back of the white shirt and white numbering on the blue shirt.

Paris 2001 Herrenknecht / Sassco 6-a-side short sleeve shirts.
A shirt used as a “Summer shirt” for the 6-a-side. Unfortunately, these were paint damaged and were therefore unusable. Due to the poor weather, another short sleeve shirt wasn’t purchased until the Summer of 2007 for the 11-a-side.

Liga Cup 1999-2001 Herrenknecht / Sassco 6-a-side shirts.
A rarely remembered shirt and the first ever Sassco badged shirt, which was used for the 6-a-side. Made by Adidas and imported from the United States. The brand name was Liga Cup and it was quite unusual as it had the old Adidas Trefoil logo on. This was introduced at a time when “retro” looks were unheard of. This was close to becoming the first 11-a-side shirt, but was changed in favour of the ones shown above. It started with a Herrenknecht badge, but was changed once the Sassco name was introduced in 2001. Looking back, this was by far the most stylish shirt Sassco had worn.

1999-2000 Herrenknecht 6-a-side shirts.
The first ever “Sassco” shirt, although the name Sassco wasn’t conceived until a few years after it’s introduction. The shirt was non-branded and generic. The team name at the time was Herrenknecht as it was the sponsors name. 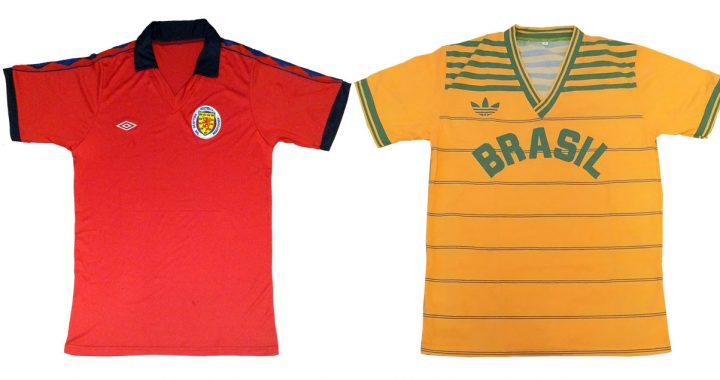 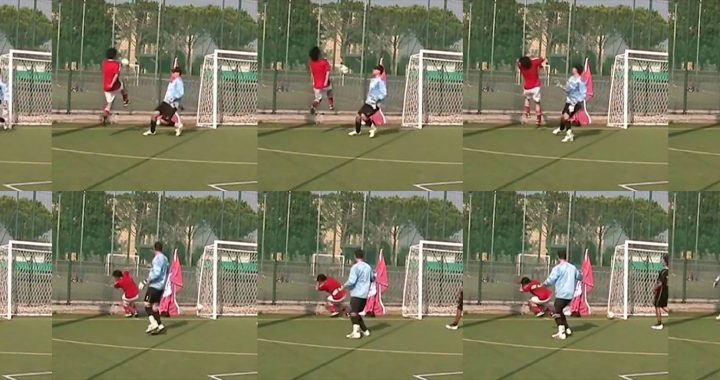