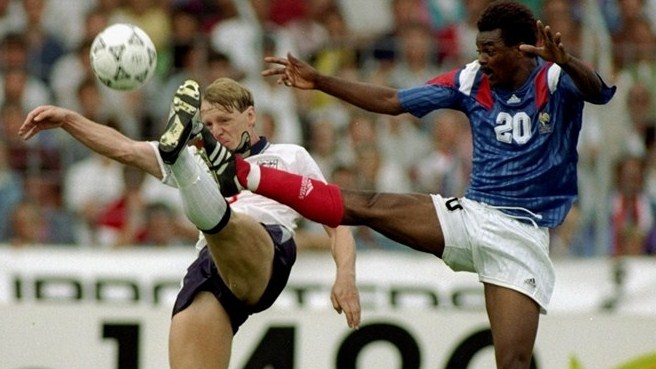 A cruel bounce off the crossbar denied Stuart Pearce a goal as France smothered England’s attacking intentions in Malmo in their second Group A game.

Still bleeding following a clash with France’s Basile Boli, Pearce delivered a tremendous effort from 25 metres but it smacked the underside of the bar and did not cross the line. The result leaves both sides in a frustrating situation – after two games they have two points apiece, and with Sweden subsequently beating Denmark, the nominal favourites are in trouble.

France coach Michel Platini set out his stall to defend, with Luis Fernández fielded in place of Christian Perez, who had looked lively in their 1-1 opening draw against Sweden. There would be few sights of goal for either side, with Gary Lineker frustrated in the first half when his strike partner Alan Shearer could not produce the right ball to exploit a rare French blunder.

Defender Des Walker could take credit for denying the dangerous Jean-Pierre Papin any room for manoeuvre at the other end. That was scant consolation for manager Graham Taylor, whose direct tactics were proving ineffective in Sweden and unpopular back at home.

I’m offering this for free download and watch, but any donation would be grateful (mainly due to the admin and processing time).