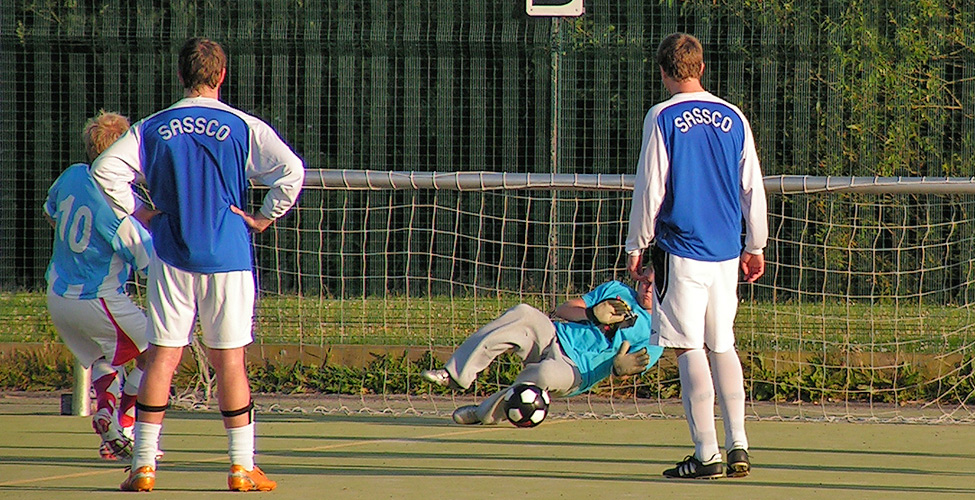 Gary Tyzack (number 10, watched by Lay and Lay in change shirts) fires in a penalty which is saved by Laing.

The final set of games to decide the semi final placings took place tonight in searing heat. AA gained the two wins as expected, but both were narrow ones, while Wear’s brave performance in two games failed to get them the three points needed. Thanks also to Ken Street for coming in to referee at short notice in Anth Mouat’s absence. Also, thanks to Tommy Bell for offering as well.

AA Fabrications 1 IPS 0
A superb defensive performance from IPS. AA had most of the play, but IPS repelled everything. Lainey had a few minor shots at him, but at the other end, IPS broke down for seconds and Kurt Baxendale fired in the winner. Despite the defeat, IPS could be proud of themselves by tailoring their game to their esteemed opponents and nearly getting away with a crucial point.

AA Fabrications 3 Wear Consulting 2
By now, AA were suffering. Injury forced Wooton out of the game, while Kurt also suffered. Even with the slower pace, AA took the lead, then Tyzack rammed the worst penalty ever seen in 6-a-side straight at Lainey. It only got worse when AA added the second goal (Moon scoring both so far). However, the fightback took place when Wear Consulting scored two quick goals – the first conceded by AA in this cup competition. The players also heated up with Tyzack being grabbed by Charlie (who’d come on as a substitute) and Josh Lay giving Tyzack “the poorest patter he’d heard.” Lay managed to have the last laugh with the winner.

Wear Consulting 1 Sassco.co.uk 1
It was make or break for Wear. A single win would take them above IPS. Sassco were shocked by the absence of talisman Murton, but quickly managed to rope Steve Conlin in for an appearance in the red Kappa shirt which looked way to big for him. Wear Consulting took the first step to the Semi Final when Tyack easily drove past Sangha for the opener. Up until then, Sassco had missed plenty of opportunities. However, the second half saw a long throw from Simpson land at Tyson’s feet and he made it 1-1. Both teams had good chances in the second half and Wear came heartbreakingly close to a second, but failed and sent IPS through to the Semi Finals, where they face AA again. Sassco have Hendon to overcome. 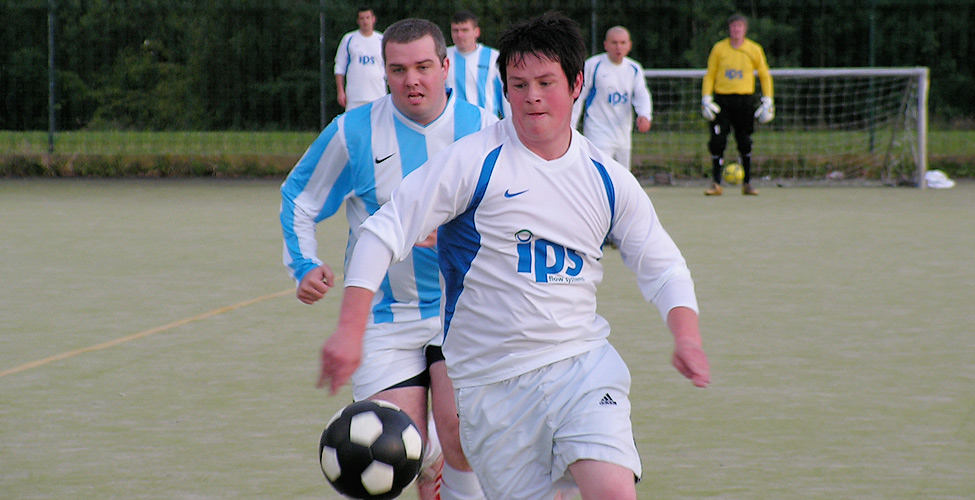