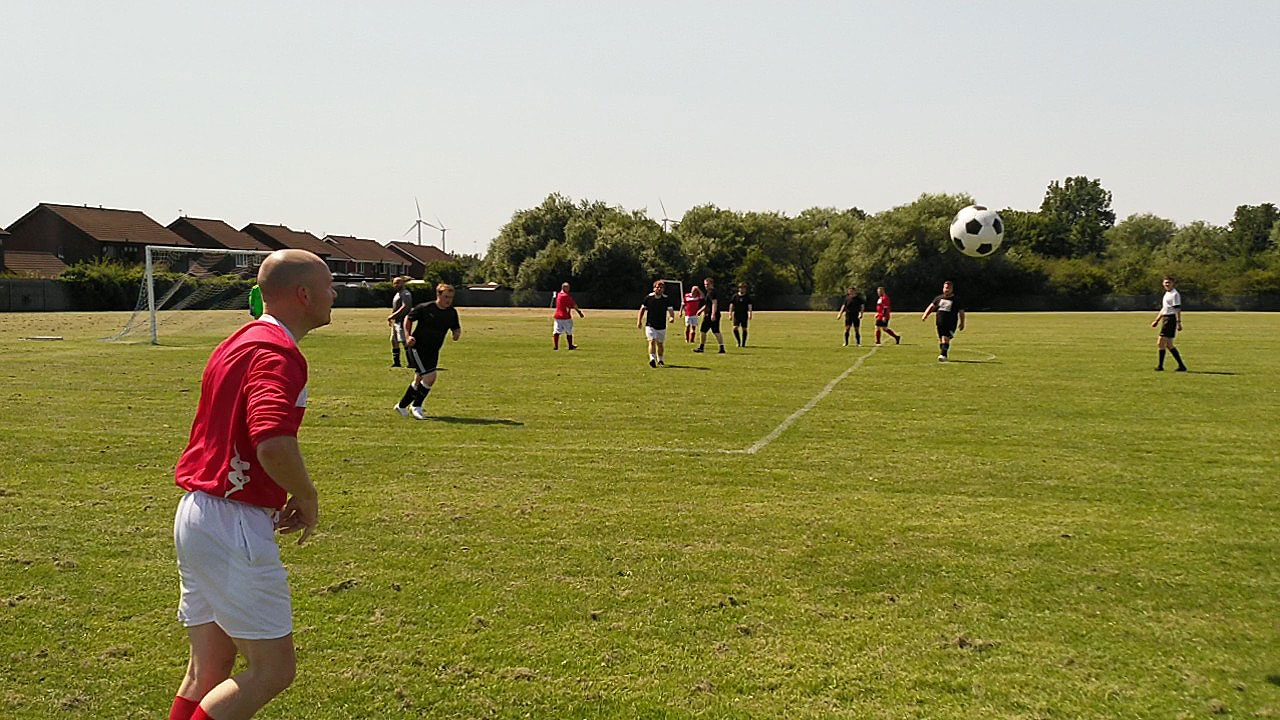 The return of Murton to the Sassco 11-a-side team.

Best performance for a while.

Our third 11-a-side game was rapidly coming up and the squad was a bit up and down. We had entrants, then drop-outs, and with temperatures heading up to 30º, plus Macca in the team, we knew we needed reinforcements.

Luckily, we posted on Facebook announcing the panic. Social media has more uses than the standard abusing of black people, with the result being Gareth Greener announcing he’s available. He bolstered a formidable midfield and forward line – possibly the best we’ve had for a while. Neil Middlemiss, Mike Baxter and Greener were joined by David “Bunta” Murton, who had purchased new boots for the occasion (although I advised him to keep the receipt). Murton’s last 11-a-side appearance for Sassco was in May 2009. Up top was Michael Chapman, a natural Murton disciple. The other newbies were Kevin Dobbs (I’m sure I spent the game calling him “Robbo”) and ‘keeper Michael Smith. Both were drafted in by Anth Yates, who had to drop out. Baxter got in Clicker Clarkson, while the others were Couto, Whelam and Macca.

Immediately, Clicker gave a penalty away and the first thing that Smith did was pick the ball out of the back of the net. However, even from the off, we were dominant. The midfield sprayed it about and there were no long or through balls. All were excellent and we soon equalised from a cross and header from Dobson. Soon after, we were 2-1 down again as we didn’t clear the lines. Nevertheless, we got back on top and were 4-2 by half-time. Murton was introduced into the game after 10 minutes and his first move was to chase around the pitch in an arc from the right back position to the left midfield side and then hurtling into a challenge on the forward right wing.

By the second half, the opponents (who were formed from the Hillarys team and were joining a league) were flagging and our team took full advantage. Goals were flying in and at this stage the goal scorers were Dobson, Chappie and Greener had fired one in and Baxter had a hat-trick. Late in the second, our midfield took their foot off the pedal and we sustained a little pressure. Macca had nodded one in as an own goal, and they’d scored another. Most of the goals were given away by players at the back hanging on too long, pretending to be England. Everyone but Sangha, who had one of his best games to date with even Bunta declaring: “Sangha rock solid at RB.” although that could be “Rhythm and Blues.”

As the pressure increased, Chappie scored a superb lob over a stranded goalkeeper and then Greener scored in the dying seconds from his own half, when their keeper was off the line coming back from a corner. This rounded off a superb performance, and, as we played with the traditional retro Sassco ball it’s obvious that the traditional Sassco ball has to be the way forward, instead of these shite Nike and Adidas efforts.

In the evening there was a metal bin burning in the area where Bunta lives with his football boot box and receipt turning into ashes, as he’s back and awarded himself the Man-of-the-match award.