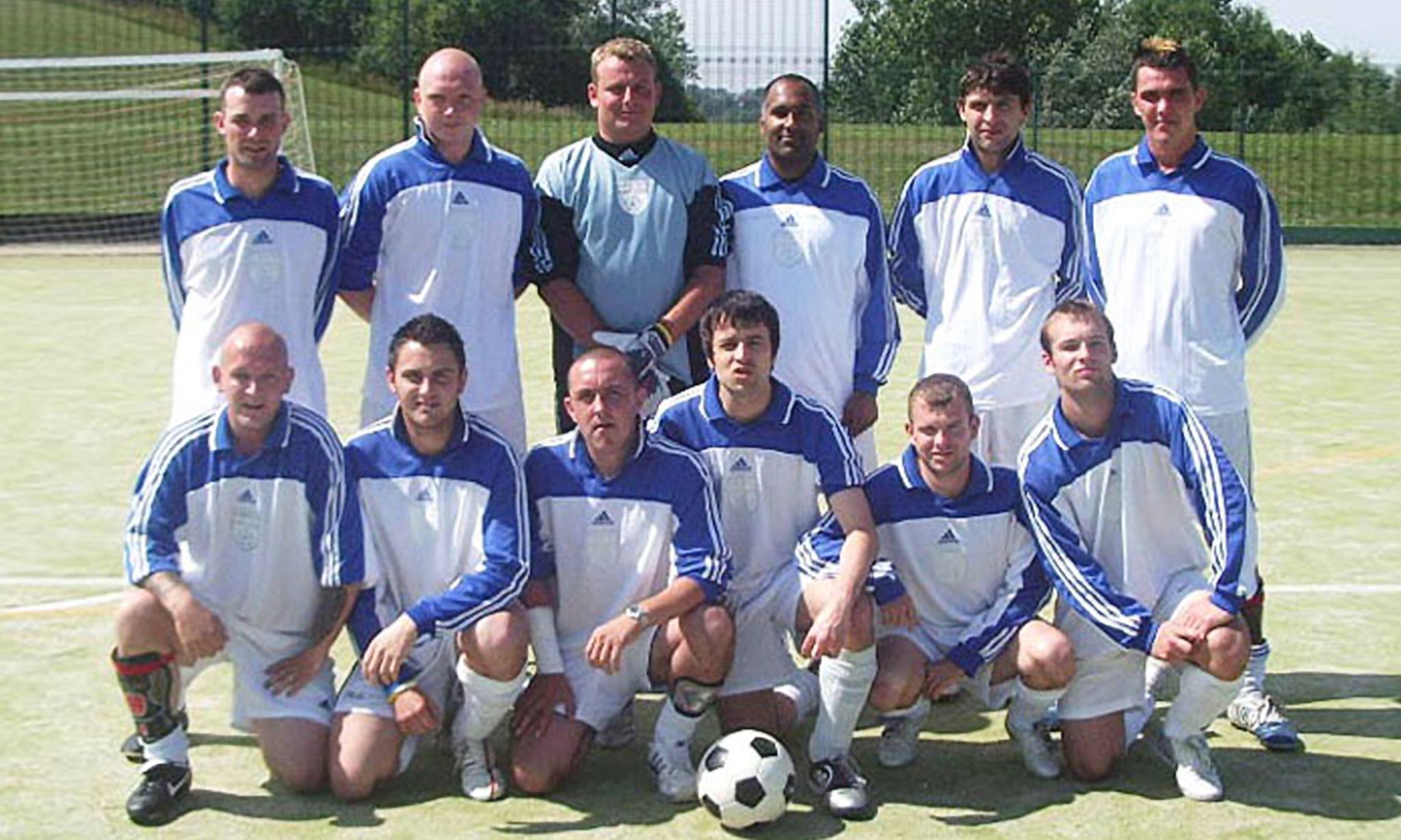 Travel problems weren’t too bad. I had to pick up Stapes, Muers, Hembrough and Minnie, but when we arrived there, all were present and basking in the sunshine. But when we got to the pitch (with Gourlay and Pearson arriving) it was quite evident from the moment the opponents turned up that it was going to be difficult. The last game saw good effort from the team but bad organisation. But this time it was full kits, pre-match warming up and god knows what else. Keith Nobbs, who is running the show, has evidently done an excellent job in the last few months on setting the African team on a course to success.

We had the team that I expected. Only Watty was unavailable at the last minute but this was half expected. The Tash refused to play after I mistakenly said, “Probably not,” to his request to be there. He turned up as a spectator with sun glasses which obviously came free with a teenagers magazine or something. The other problem was that most of Redhouse FC’s squad turned up to watch and hope we’d be humiliated. So despite the sunshine, it was turning out to be an unpleasant day for me.

Our main problem was how to play this game. If all went to plan, the opponents would attack in droves while leaving their back line exposed. This time we had Hembrough partnering Middlemiss in attack and goals were expected. The game kicked off and it did go to plan. The opponents opened the scoring with a cracking drive past Fatty in goal (he volunteered).We looked as if we were going to struggle. We were very disjointed at the back and the heat was burning us and affecting us badly while the opponents seemed undaunted by it. But on our breakaway, we equalised almost immediately. Soon we were 3-1 up and coasting. Minnie and Hembrough were very solid up front and based on a ratio, they tended to slot home every second chance. Greenwell, though, missed a true clanger when he was one-on-one. It was soon 4-1 and we were almost home and dry. Other chances were missed during this period including several goalmouth scrambles whenever we attacked.

But that’s where it got difficult. The African team came back strongly and scored a couple of goals (including a beauty from Dave G) and should have had more. It was 4-3 and even the half time break didn’t help us out. Rapidly tiring, we struggled again at the back while in midfield, John Oliver and Greenwell had their work cut out by trying to stop their supremely talented opposing number 8. He seemed to be at the heart of everything and we failed to pick him up. John O tried to do a man-to-man job on him but it broke down. Also the number 8’s quick turns and spins outwitted John O, playing in bad footwear and also Greenwell. I soon came on for John O and immediately was stuck into the action. Jase went centre half while Mickey Pearson moved from right back to centre midfield where he was a positive influence on the game. But before that, they equalised. It was 4-4 and this was just after I cleared off the line. They were fully on top and all the Redhouse FC squad probably expected us to wilt.

But it didn’t happen. We broke away and scored again before adding another two goals to give us a 7-3 scoreline. Muers also subsequently got dismissed for fighting, allegedly the opposing lad called him a “white c**t.” (so now you know how it feels Dunston). There were several scuffles during the game involving Dunston, John O and Amour. But it didn’t explode and the game was a satisfactory run out for both teams.

The end scoreline would give the impression that it was comfortable, but it definitely wasn’t. But then again, we were missing Jeff Clark, Mark Sammut, Chris Dixon and goalkeeper, Watty. So the back line only had Stubba in who’d be classed as a regular there and even he was due to go in goal had it not been for an injured hand. I think in the circumstances we did really good. Hembrough and Minnie were a class act up front. Hembrough got himself 3 goals and Minnie 4 and you can’t ask for more. Stapes had a quiet game. He got stuck in but there wasn’t anything out of the ordinary that he did – but that’s high expectations from us. In the middle, John O and Greenwell struggled a bit as they were overrun, but there’s the dilemma. If either Minnie or Hembrough would have dropped deep, we would have lost our edge up front. John O’s problem was his footwear as mentioned before. Muers produced a few good crosses but didn’t do anything outstanding. Pearson and Gourlay were excellent, Gourlay in particular. Coming out of defence, he made our left side the strongest and most of the goals were initiated by himself. Pearson had a difficult job in the centre half position but did exceptionally well when he was pushed into the middle section of the park. Jase Amour struggled to start with and some of his clearances were bong eyed, but it was tiring out there and for his substantial kite moving about within that long sleeved shirt, you know he did well to keep up. And Wardle was outstanding in goal. Although one shot went through him and another was a cracker from Dave Gourlay, he performed outstandingly and becomes our fifth choice ‘keeper behind Watson, Stubba, Muers and Minnie.

A good game and brilliant surroundings. We still have a bit of a weak back line when some of our regulars aren’t there and this was our first friendly where we were cruelly exposed. But luckily the forward line did it’s job. If the front players are scoring four and the back are conceding four, it’s plain to see where the problem lies. We missed Sammut and (a few months back I couldn’t imagine myself saying this) the defensive qualities of Digga as right back. But we won and that’s good enough. Everyone had a good run out. Keith Brazier did a great job in refereeing, but he did say that he had a problem “understanding what they were saying,” but I said I couldn’t understand my team neither, especially Wardle. 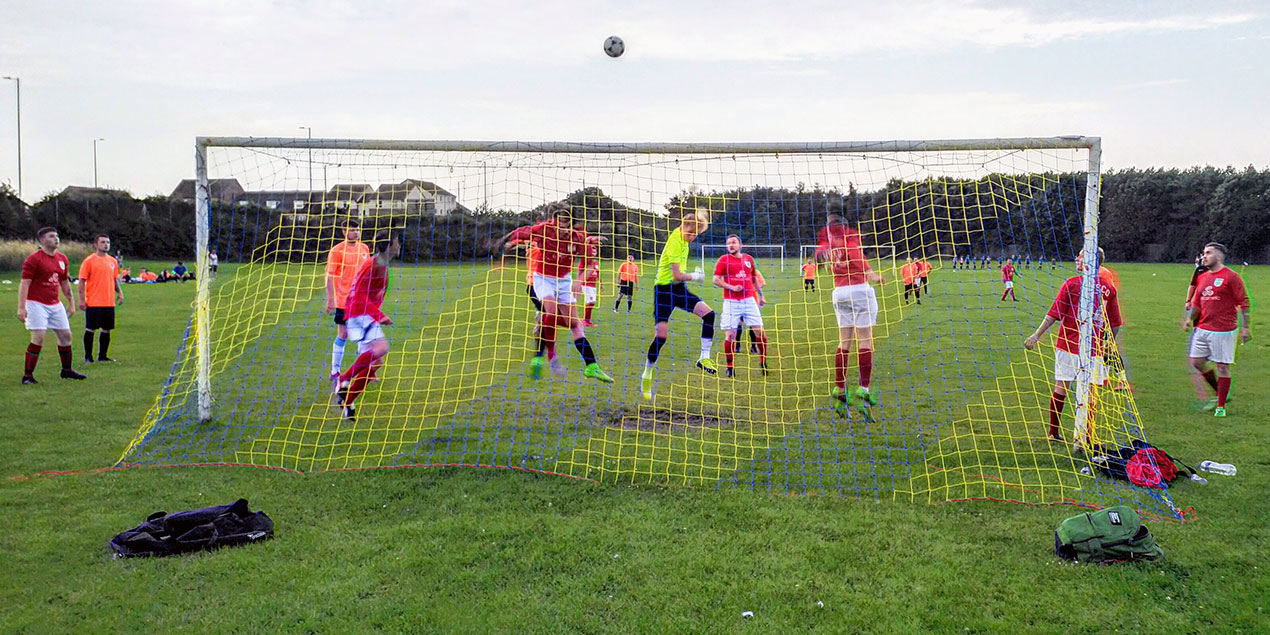